Happy Halloween – Join us for a special event! 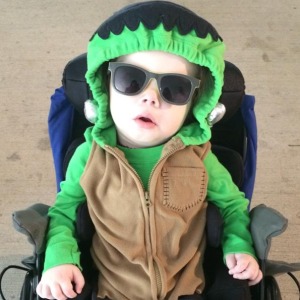 Join Jackson and Reilly for a special Halloween event! So thankful for the MedStar crew and residents of the Pembroke Drive/Berkeley Place neighborhood that are helping make this happen (read full article below)!

FORT WORTH — One-year-old Jackson “J-Bird” Wallace lost his smile and laughter because of Krabbe disease, and 15-year-old Reilly McMurray hasn’t been able to talk or walk since an anoxic brain injury a few years ago.

But the two will be in full Halloween gear for trick-or-treating Friday night, thanks to a MedStar crew and residents of the Pembroke Drive/Berkeley Place neighborhood in Fort Worth.

J-Bird and Reilly were selected for a program in which MedStar crews take kids with medical restrictions on a Halloween outing. It’s the second year that the ambulance company has sponsored such an event on Halloween night.

“Children who are receiving medical care often do not have the ability to experience typical ‘kid things’ like trick-or-treating,” MedStar spokesman Matt Zavadsky said in a news release. “This is one of the ways we give children the opportunity for some normalcy when things may not be normal for them.”

MedStar officials will send a crew and an ambulance, complete with safety clowns, to pick up Reilly and J-Bird and go door to door in the Pembroke Drive/Berkeley Place neighborhood.

Reilly was a Halloween veteran in his North Richland Hills neighborhood, visiting neighbors in his younger years in a variety of costumes.

When he was 11, he had an accident while playing football.

“The football went down a drainage ditch and he went after it,” his father, Josh McMurray, said Tuesday in a telephone interview. “He reached to grab what he thought was a rope and instead it was a downed power line.”

“He understands everything that is going on,” his father said. “Physically, he’s limited. He needs a feeding tube and his arms are drawn-up.”

The family moved to Haslet and has home-schooled Reilly for the last few years. That changes Monday, when he will attend Wilson Middle School, a Northwest district school in Fort Worth.

Reilly still has to decide on a costume, his father said — the Grim Reaper or a zombie.

The Keller toddler has a form of leukodystrophy called Krabbe dsease.

“One out of 100,000 babies are born with it,” Wallace said in a telephone interview Tuesday. “We have to go twice a year to Pittsburgh for him to see his doctor.”

J-Bird was diagnosed a year ago.

“He doesn’t move on his own, nor does he have sight,” his mother said. “He still can hear.”

But J-Bird, a nickname that his parents gave him when he was younger, is still a happy toddler. He dressed as Winnie-the-Pooh last Halloween.

“He still loves doing this kind of thing,” Wallace said. “He may have lost his smile and laugh, but his eyes just light up.”

Content on this site is not intended to be used as medical advice in the diagnosis or treatment of any condition and is for informational purposes only. Please seek a medical professional if you have questions or health concerns.